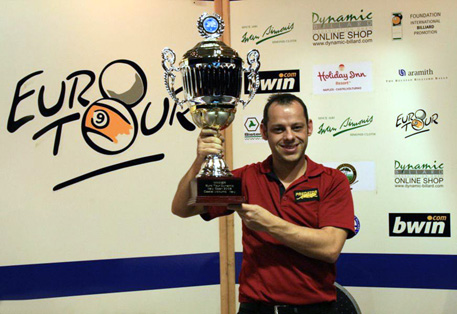 No less than 242 players participated at the Dynamic Italy Open in the wonderful hotel Holiday Inn Resort in Castelvolturno, including 20 British and 2 Irish players, with no fewer than 33 different countries represented.

The eventual winner was Darren Appleton (GBR) defeating Bruno Muratore (ITA) in the final. Appleton chose one of the toughest routes to the final imaginable needing wins over 5 previous EuroTour winners in a row in the single elimination stage (Tony Drago, Oliver Ortmann, Imran Majid, Mark Gray and Bruno Muratore) to take the title that has been long overdue in many eyes. 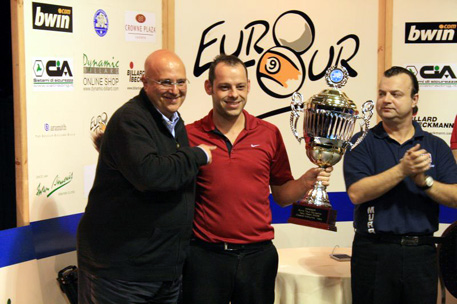 Once again it was a great event for the 20 British players as many of them romped their way through the field of competitors, 7 of them reaching the single elimination "Last 32" stage, but many were clustered in the same half of the draw so it wasn't long before they were knocking each other out of the event.

Mark Gray eliminated Damian Overton in the Last 32, and then ended the hopes of Karl Boyes in the Last 16 stage, only to be eliminated himself by another Brit (Darren Appleton, of course) in the Semi-Finals. Appleton also put paid to the hopes of Imran Majid in the Quarter-Final stage.

So, apart from the bitter-sweet victories against each other, it was another fantastic event for the UK players and we all wait in anticipation of the updated rankings, no less impatiently than Martin Chapman who earns an honourable mention for logging his best EuroTour performance to date, his 9-7 victory over previous EuroTour champion Jonni Fulcher winning him his first berth in the Last 32 stage.

Good luck to you all, from everyone at Pro9!!!