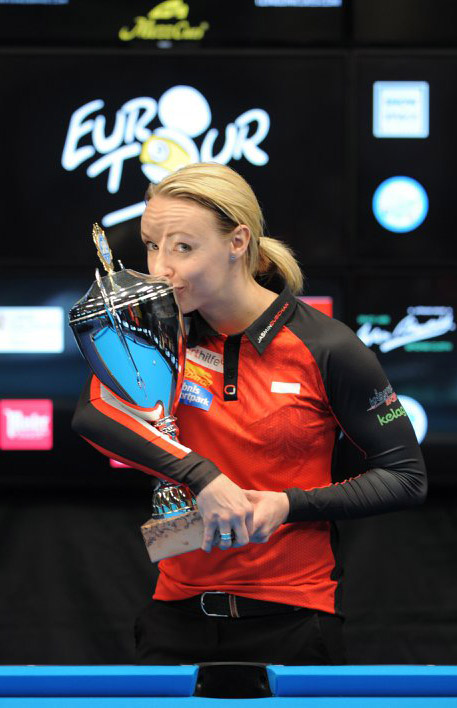 Jasmin Ouschan
Click the image to view the large photograph - use "back" to return here.
Jasmin Ouschan wins her 14th Women Euro-Tour event in Austria

The day did not start off too well for Ouschan. In her first match against Christine Steinlage (GER), she committed several easy errors and won the match just because Steinlage also played not her A-game. Probably Ouschan know that she had to improve drastically. 7:5 was the final score which brought Ouschan into the round of the last eight players where she had to deal with Kateryna Polovinchuk (UKR).


Jasmin Ouschan AUT v Christine Steinlage GER
The Ukrainian had performed quite well so far and against her, Ouschan played way better than in the match before. With 7:4 she advanced into the semi-final against Kristina Tkach (RUS) who is one of the few women in Europe that are really a huge challenge for Ouschan. However, Ouschan improved once again and Tkach suffered from her pretty bad break shot. 7:2 was the clear sore that Ouschan needed to get into the final match. There she met the current #1 ranked player in Europe, young Marharyta Fefilava (BLR). As often, Ouschan was again very dominant in the final match. She gave Fefilava no real chance. The young lady from Belarus committed a few errors when attempting to pocket a ball which was brutally punished every time by Ouschan. In the end, Ouschan stood tall and won the final match which was Live on Austrian TV with 7:3. That was Ouschans 21st appearance in a womens Euro-Tour event out of which she won 14. That is an impressive quota.

When asked, what her secret was, Ouschan answered:  I wish I knew. Just like all the other women, I practice very hard and I am very thankful to be in that position.  Ive done a lot for this victory but I also know that I needed a lot of luck to win in the end.  I would like to congratulate Marharyta for her second place. I have played her a couple of times now and it is simply amazing how much better she got in the past years.  So many young players are coming and playing really good pool now. It is really great to see this development in our sport.

That concludes the coverage from Sankt Johann im Pongau, Austria. The next event will be the European Championships in Veldhoven, The Netherlands, July 19th through 31st.

The event was hosted by the European Governing Body for Pool, the European Pocket Billiard Federation (EPBF) and organized by International Billiard Promotion (IBP). For further information and reference please go to the federation website www.eurotouronline.com visit us on Facebook or check out our youtube channel for regular news clips or contact our press office press@epbf.com. 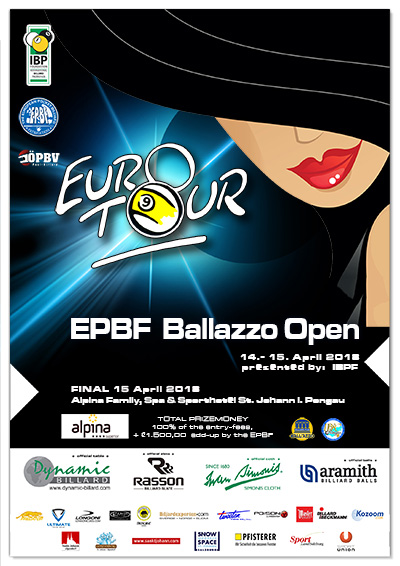 Click the image to view the large poster - use "back" to return here.