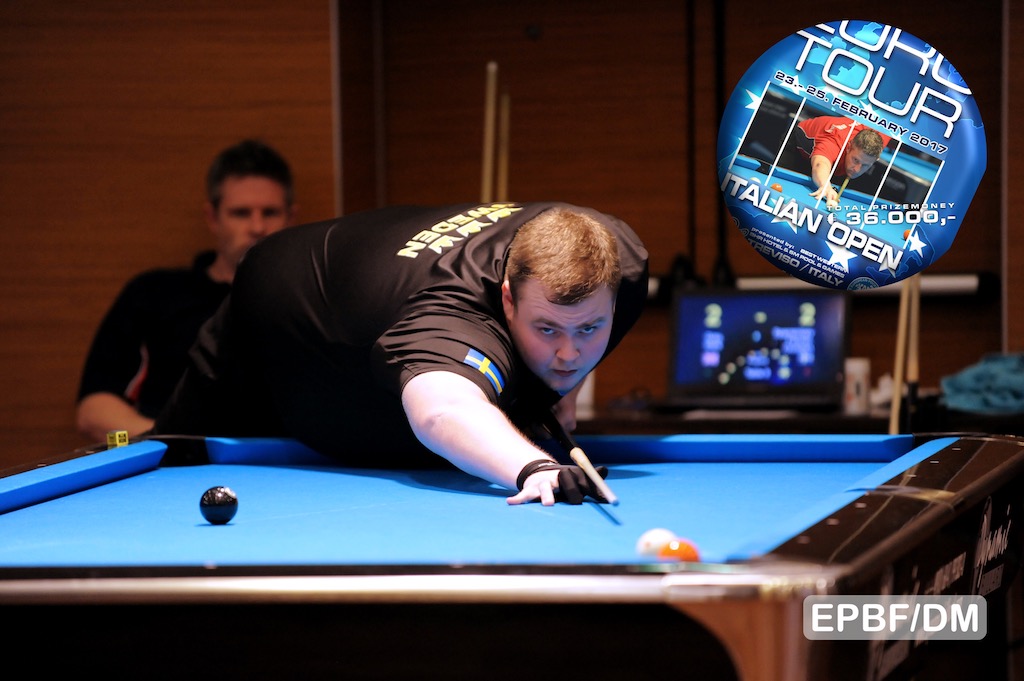 Click the image to view the larger poster - use "back" to return here.
Europes number one defeated in Treviso in round one

 I need to improve rapid or home it will be!!! stated Gray on his Facebook page after todays match. Obviously, he did not play his best game. But also his young opponent from Sweden took care about not letting Gray playing like he wanted to. Sparrenloev kept the match open at all times and made sure that Gray could not get an advantage over him. In fact, as the match unfolded it turned out that the opponents took racks in turn and the distance between the two was never bigger than one point in difference. After 14 racks, the match was levelled at 7:7.

Sparrenloev broke the 15th rack and had one ball down with a long shot at the 1-ball. He confidently pocketed the difficult shot and went for the rack. Though all balls were playable the rack was not really easy, especially at that stage in the match. But the young Swede mastered the challenge and ran the rack, demonstrating some nerves of steel and going on the hill with an 8:7 lead over Gray. Rack 16 was Grays break shot. Now the pressure was on the ranking leader himself. He had two balls down and a very nice spread of the rest of the balls. However, the first shot on the 1-ball was a bit tricky since he could not fully see the ball. It was hiding behind the 7-ball. Gray tried to play the 1-ball rail first but missed it completely, leaving the table with ball in hand for Sparrenloev. What a bad mistake for the Brit that was! Sparrenloev accepted the gift and won the rack, taking the match with 9:7 and proceeding to winners round two while Gray needed to seek his chance on the losers side of the event now. His first match there was a nice and comfortable 9:4 victory over Jan Wolf (GER). Sparrenloev encountered Wojciech Sroczynski (POL) in winners round two. That match went against Sparrenloevs liking and ended 3:9 in favour of Sroczynski.

American super-star player Shane van Boening (USA) also plays in this prestigious event. Coming from the World Pool Master which have just been finished in Gibraltar, van Boening wants to seek his fortune on the Euro-Tour in his second appearance after having played in France several years ago. He met Piotr Kudlik (POL) in his first match in winners round one and that match turned out to become a thriller. Both players took racks in turn which led to a 7:7 tie after 14 racks. In rack 15, van Boening played pretty good and unspectacular but solid pool and had already lined up the 9-ball. Suddenly, he missed an incredibly easy shot by a big margin and gave the rack away to Kudlik to get an 8:7 lead over him. After that the audience thought that this incident might have destroyed the US player but van Boening is known to be capable to handle these tough situations. In a high tense and action packed match, van Boening ran two more racks and took the match with a thrilling 9:8 victory over Kudlik. In his next match in winners round two, van Boening encountered Kim Laaksonen (FIN). Van Boening also took that match 9:6 and is now in the winners qualification round where he will have to deal with the winner of Koniar (SVK) and Babica (POL).

The feature match of the day today was newly crowned World Pool Masters Champion David Alcaide (ESP) taking on Karol Skowerski (POL). That match was fully streamed LIVE on the EPBF Facebook page and many viewers from all over the World enjoyed the show. Alcaide was definitely the player to bet on in this match. But Skowerski recovered from trailing 1:3 and 3:5 and turned out to be the winner in the end with 9:7 because Alcaide left the 4-ball hanging over the pocket for him when Skowerski was 8:7 up. Every day, at least one match will be shown LIVE on the EPBF Facebook page and viewers may interact with the organisers and express their opinion about the match, cheer for their respective player or simply watch the action as it happens in Treviso.

Tomorrow, the Dynamic Billard Italian Open will continue at 09:00 CET with matches from winners round two.

The Euro-Tour is played on 20 tables which are all streamed LIVE throughout the whole event. In order to be able to follow all the action LIVE, premium membership can be purchased at www.kozoom.com. Once a premium membership is held, all events for the respective period of time can be viewed LIVE. Additionally, a huge video gallery is contained in the website.

The event is hosted by the European Governing Body for Pool, the European Pocket Billiard Federation (EPBF) and organized by International Billiard Promotion (IBP). For further information and reference please go to the federation website www.eurotouronline.com, visit us on Facebook or check out our youtube channel for regular news clips or contact our press office press@epbf.com. 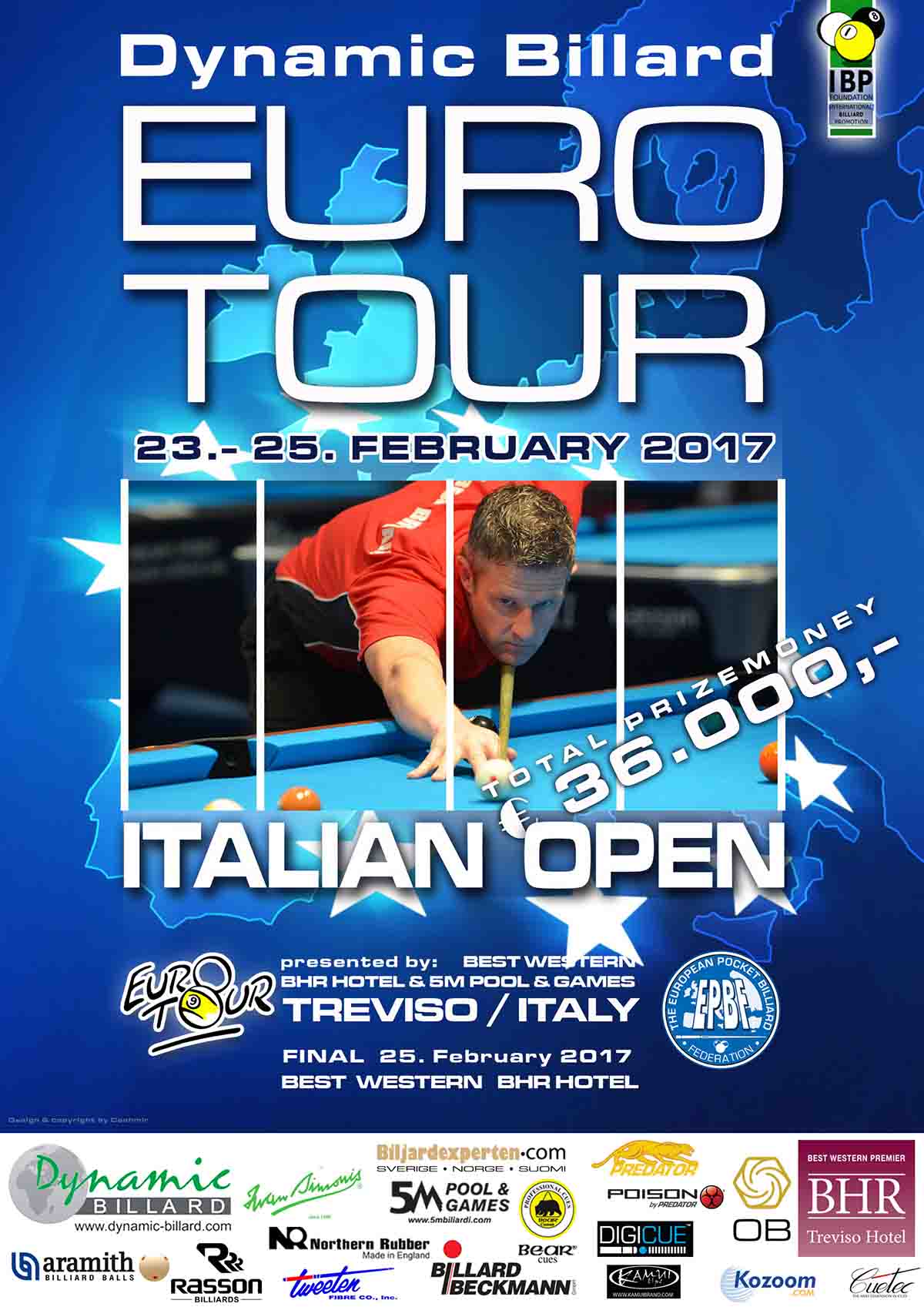