Click the image to view the large photograph - use "back" to return here.
Another victory for Jasmin Ouschan

With a convincing 7:3 victory over Katarzyna Wesolowska (POL), Jasmin Ouschan (AUT) has secured another title for her collection, the victory at the Dynamic Billard German Women Open tournament in the Stadthalle in Baunatal, Germany.

The final match was dominated by Ouschan alone. Her break was good and only in the beginning of the final match, Wesolowska seemed to put up some resistance against Ouschan. The more the match went along, the clearer Ouschans will to win was while Wesolowskas energy seemed to have lost her somewhere along the way. It seemed as if Wesolowska had lost all her power in the tough semi-final, where she had to face Diana Khodjaeva (BEL). Although being up 6:2 already, Wesolowska could not close the book on Khodjaeva. The Belgian struggled and pulled back rack after rack, partly because of Wesolowskas mistakes, partly because of her own strong play. At 6:6, two balls were remaining on the table and Khodjaeva provided a decent safety position for Wesolowska. Katarzyna Wesolowska had to go for the 7-ball over one rail. She went for the shot, pocketed it and got perfect position for the 9-ball. That brought her into the final match. On the other side, Ouschan more or less destroyed a so far strong playing Nataliya Seroshtan (RUS) with a 7:2 result. So Jasmin Ouschan had more or less smooth sailing into the final match.

Ouschan did not lose one match throughout the whole event. Most matches, she was dominant from start to the end. Whenever she had to struggle, it seemed that this was only in the first few racks of the respective match. Then, there appeared to be a point in time when Ouschan kind of  switched into overdrive mode and simply ran away from her opponents.

 It is true, this happened quite some times during this tournament, stated Ouschan after the final match in a interview.  I have been practicing my mental side and I think it is an advantage I have over my opponents. When asked about her future focus, she replied:  My next goal is the China Open which will be played in about a month from now. This tournament was a prefect preparation for me. things really worked out my way and I am confident to get a good result in China. 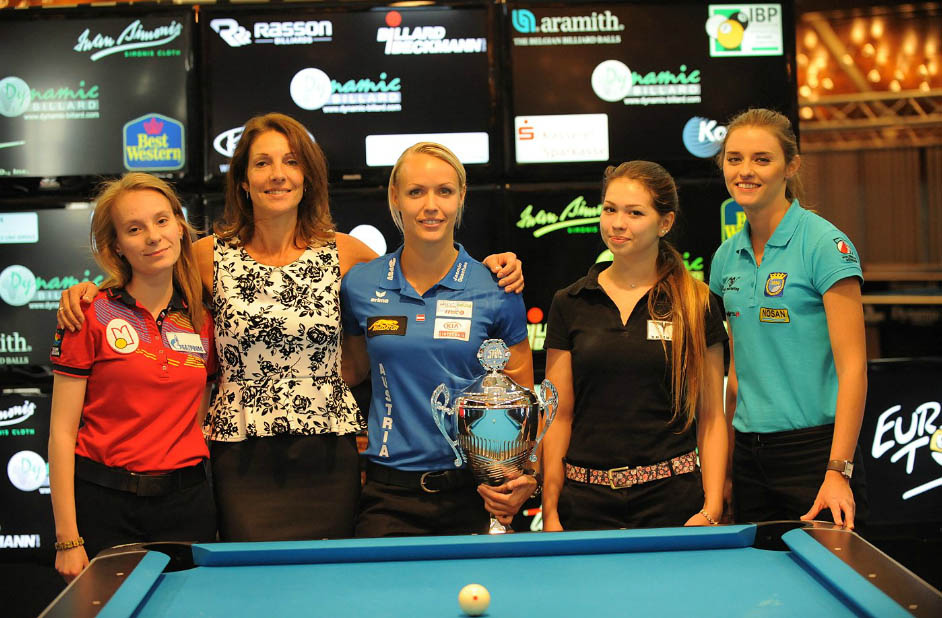 Click the image to view the large photograph - use "back" to return here.
Top eight finishers

That concludes the coverage from the Dynamic Billard German Women Open. The event was hosted by the European Pocket Billiard Federation EPBF and organized by International Billiard Promotion, IBP. For further information, please check the event website at www.womeneurotouronline.com, visit our Facebook page or contact the EPBF press office at press@epbf.com 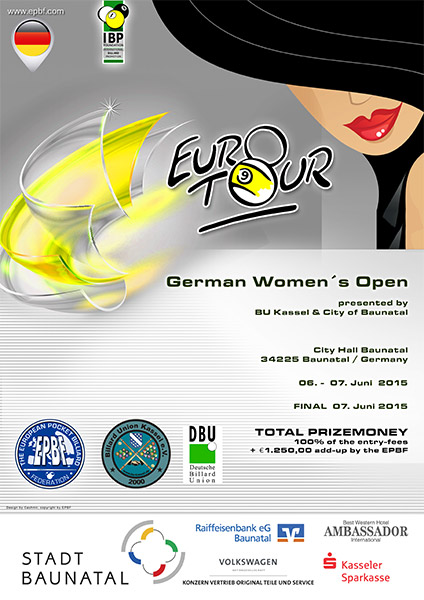