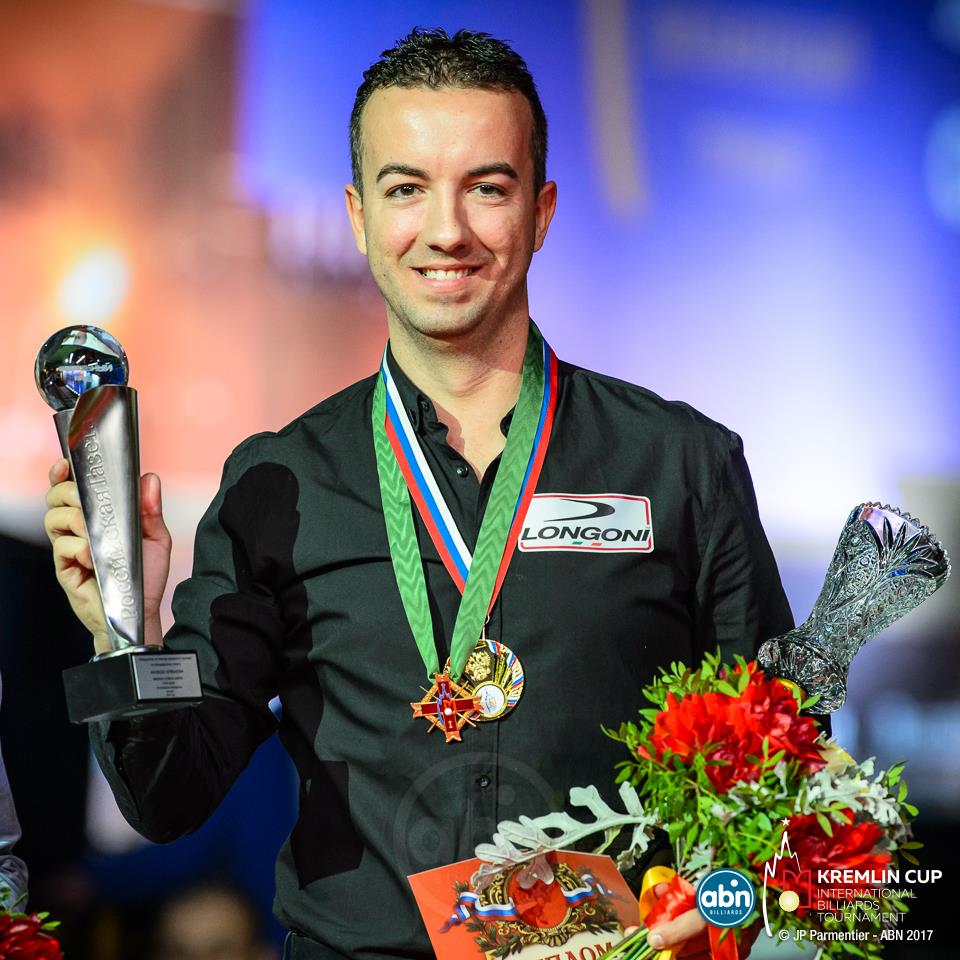 David Alcaide - Spain
All photography courtesy of ©JP Parmentier at www.jpparmentier.com
Click the image to view the larger photograph - use "back" to return here.

This year's Kremlin Cup 10-Ball event featured the strongest field ever with 10 out of 30 top WPA ranking players coming to Moscow. For the second year straight 101 participants filled the double elimination bracket with knock-out stage for last 32. Kremlin Cup is a WPA sanctioned event and for the first time it appeared as one of European qualification events for the Mosconi Cup. Therefore many pros travelled to Russia chasing valuable points.

Once again Poland appeared with strong representation led by Mateusz Sniegocki (World Pool Masters and Kremlin Cup winner back in 2012). Radoslaw Babica handed defeat to one of Russian top guns Konstantin Stepanov in the round of Last 16 and Wojciech Szewczyk managed to send no other than Shane Van Boening packing. Six Polish players advanced to single elimination but none of them finished on top four. Same goes about the Russians. None of the local players which represent a mix of skilled experience and young talents managed to go past the round of Last 16. Ruslan Chinakhov looked heavy favorite to go past Petri Makkonen of Finland at the scoreline of 5-0 in favor of The Siberian Express. But the Finn capitalized on some late mistakes by Chinakhov and produced one of the most wonderful comebacks winning the match on the hill from being 1-7 down in a race to 8. 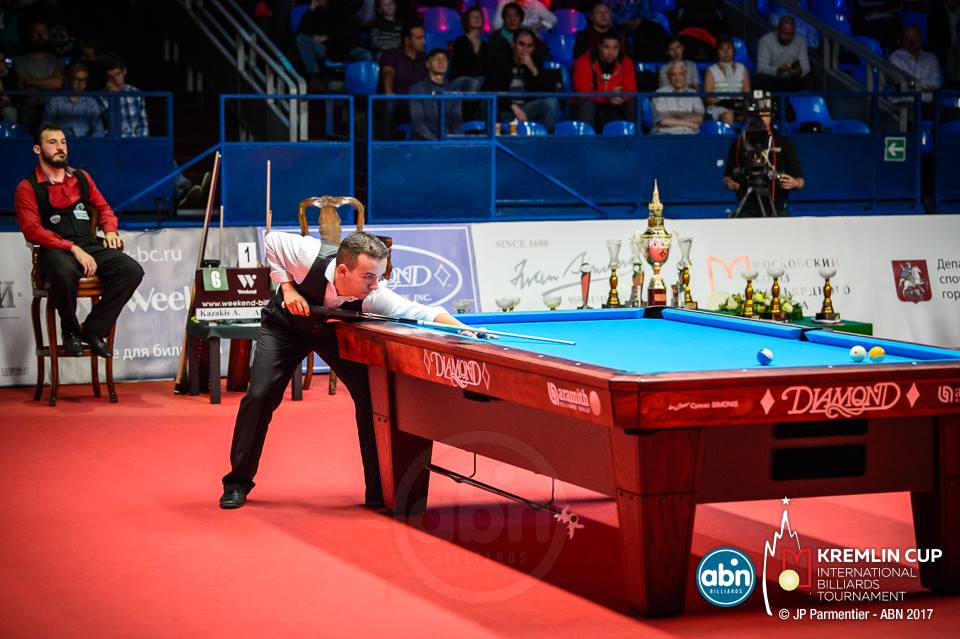 All photography courtesy of ©JP Parmentier at http://www.jpparmentier.com
Click the image to view the larger photograph - use "back" to return here.

The Mosconi Cup team USA was taken to Moscow by new non-playing captain Johan Ruysink for an early test. It was only Skyler Woodward who had to stay at home. (Right after Moscow event team USA faced Russian selection in ABN DreamChallenge match and for this one Sky was replaced by Corey Deuel. In that challenge team USA was trailing 5 to 8 points in a race to 9 and managed to win 4 matches on the trot, with SVB pulling them trough without dropping a single point in his matches, both doubles and singles). Every American but Billy Thorpe advanced to single elimination, The Thorpedo being sunk in last chance round by Eklent Kaci (WPS 2nd event winner).

The Albanian later managed to go all the way through to the semi-finals where he faced Alex Kazakis. The other semi featured Nick van den Berg vs David Alcaide. Both the Greek and the Spaniard had a quick work of their opponents. That was 6th year at the Kremlin Cup for Kazakis who this time was a defending champion. Going into the final match he was looking forward to repeat the feat of Ruslan Chinakhov and produce back-to-back wins in Moscow. But several errors made by Kazakis didn't let him do that. It was current Eurotour ranking leader David Alcaide who came victorious at the Kremlin Cup with the scoreline of 9-6 and took the trophy to Malaga. 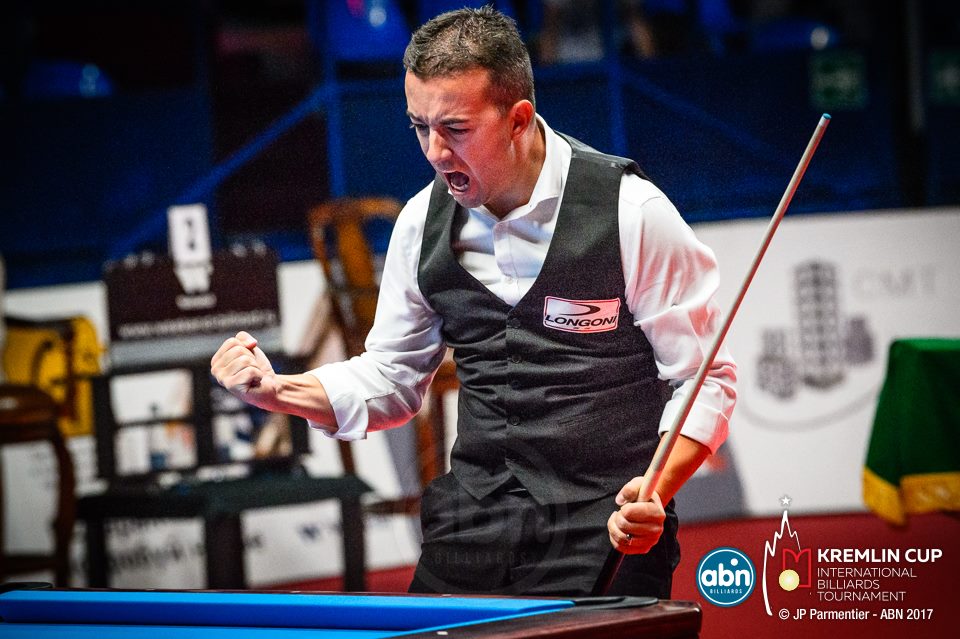 All photography courtesy of ©JP Parmentier at http://www.jpparmentier.com
Click the image to view the larger photograph - use "back" to return here. 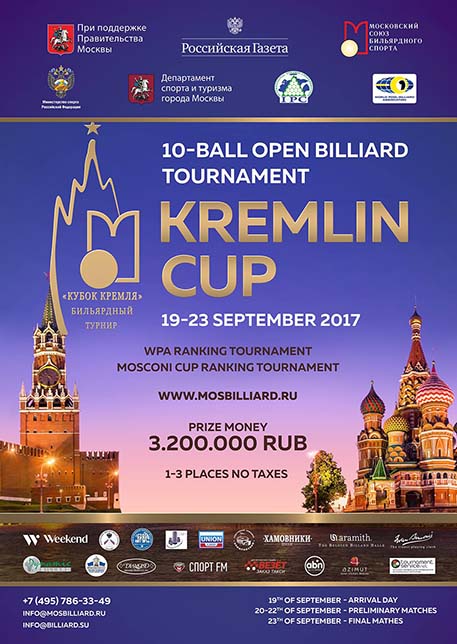