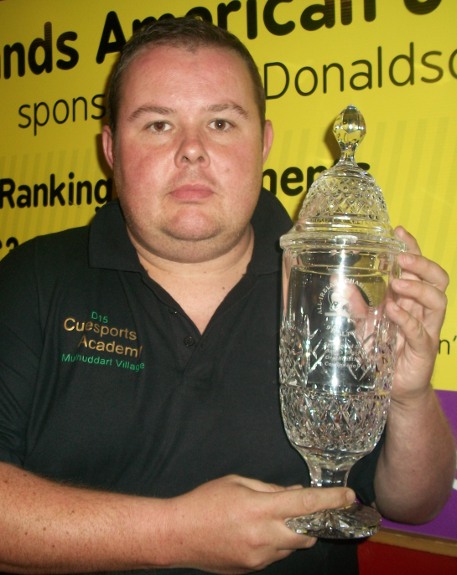 World Professional Snooker Player Stephen Lee became the 11th winner of the biggest and most prestigious 9-Ball Tournament in Ireland when this brilliant cue-sport player was crowned 2013 All Ireland Open 9-Ball Champion on Saturday past (27th July 2013).

Stephen was a worthy champion playing some brilliant attacking pool throughout the tournament overcoming the challenges round by round on route to victory with one of his matches coming from 6-1 behind in the ¼-finals against Daryl Beattie to record a 10-8 victory.

Stephen was a worthy champion claiming the winners cheque (there was money added to 11th annual event) plus the perpetual crystal trophy and the beautiful set of crystal glasses for his efforts with this great cue-sport player also being inducted into Irelands 9-Ball Hall Of Fame.

THANKS:
All in all another fantastic All Ireland 9-Ball Championships played at Donaldsons Snooker & Pool Club Enniskillen Co.Fermanagh and the organisers would like to take this opportunity by thanking Paul Donaldson and his hard working and friendly staff for providing a superb playing venue for these 11th annual 9-Ball Pool Championships plus becoming the official sponsor of Irelands American 8 & 9 Ball Pool Tour for 2013. 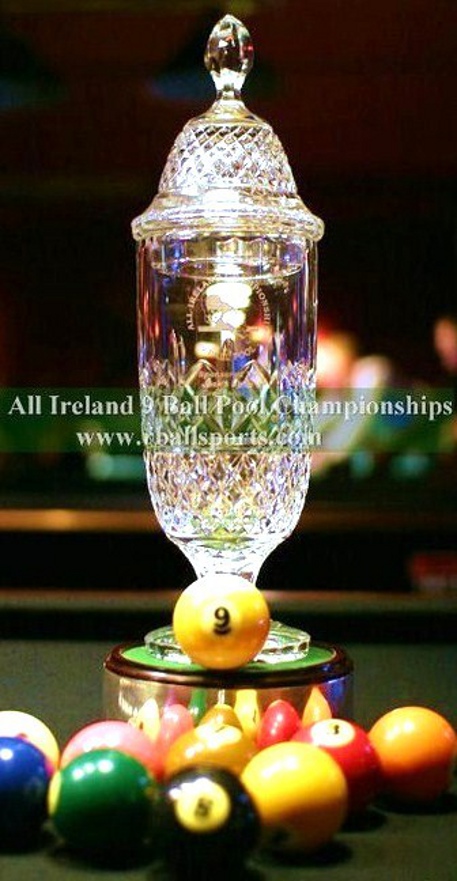 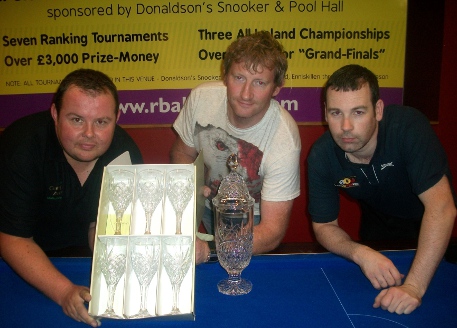 HIGHLIGHTS:
Some of the main highlights from the last-32 matches seen twice All Ireland Open 9-Ball Champion Paddy McLoughlin (Down) defeat the 2013 World Junior 8-Ball Pool Champion Carl Martin (Tyrone) on a 10-8 score-line.

Sean Hoey the 2012 Irish 8-Ball Pool Champion made a welcoming return to this prestigious event with a 10-9 victory over Eddie Gahan (Dublin) securing victory with a last rack decider.

Stevie Warnock (Ballygawley) playing in his first All Ireland Open 9-Ball Pool Championships was another player who recorded a 10-9 victory coming from 9-6 behind to defeat Wayne Jess (Bandbridge) in his last-32 fixture.

Trevor McConnell (Meath) who has returned to Irelands American 8 & 9Ball Pool Tour after afew years away from the game made a winning return with a superb 10-6 victory over a former tour winner Gareth Deegan (Dublin).

Another player who competed in the All Ireland Open 9-Ball Championships after afew years away from the 9-Ball game was Damien Corrigan (Tyrone) who returned in style recording a fabulous 10-4 victory over Paul Tierney (Meath) in his last-32 match and carried his fine form with him round by round to reach the final which included a brilliant 10-9 victory over twice winner Paddy McLoughlin in the ¼-finals. 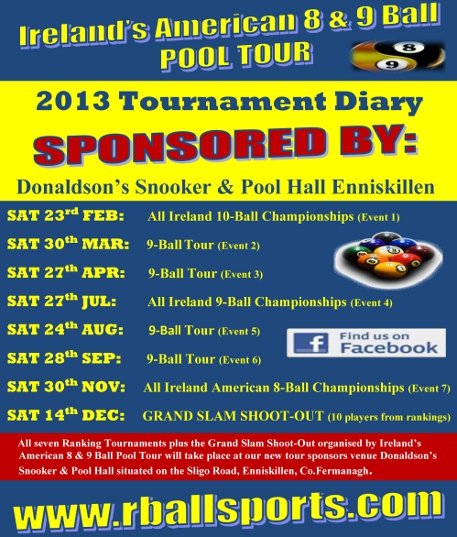