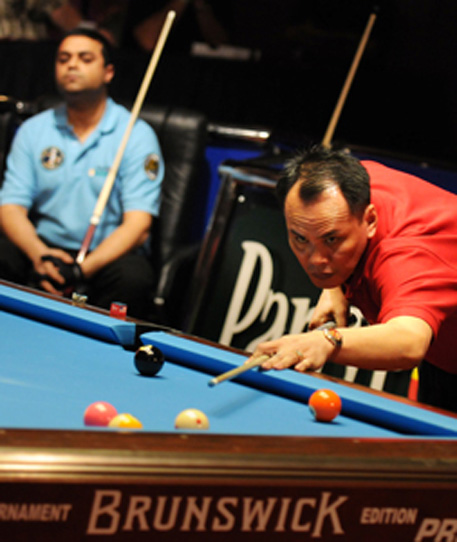 Photos © JP Parmentier / Matchroom Sports
Francisco Bustamante made his way into the semi-finals of the PartyPoker.net World Pool Masters to set up an all-Filipino clash with Alex Pagulayan following an 8-4 win at the Riviera over Englands Imran Majid.

Majid played well in patches but his luck deserted him at critical moments and Bustamante made enough quality run outs to keep himself ahead throughout.

That was a great match and I played good in the beginning, said Bustamante. Majid got close and I was lucky when he scratched on the break at 5-4. That was a very big game for me.

"Read more" for the details.

Ill try my best against Alex in the semi-final. I last played him in the World Championship in the Philippines last November when I beat him.

The Filipino won the lag and completed a comfortable run out to take the early lead and with two balls off the break in the next, another clearance made it 2-0.

There were two more balls down from Bustamantes next break but he scratched as he needed to force the cue ball to gain position off the yellow 1. Majids first visit to the table was with ball in hand but he missed an easy 8 ball into the corner pocket to gift the rack to Bustamante.

A fluked 3 ball from the Filipino set up another run out to take the score to 4-0 but he came up dry in the fifth game to give Majid his best chance.

He missed the 1 ball into the centre pocket though and Bustamante pocketed it with a precise bank shot. A bank on the blue 2 wobbled in the jaws and stayed out and Majid set about the table but a nudge on the cue ball made him lose position.

Majids snooker on the 7 ball forced Bustamante to reach for his jump stick and although he made contact, it fell nicely for Majid and he ran out to take his first rack of the match.

A dry break from Majid allowed Bustamante back to the table but he was forced to play safe. Majid though laid an excellent snooker and although his opponent escaped, it left the 1 ball on.

A positional error from Majid forced him to play safe and both players went back and forth with safeties. Bustamante made the first mistake which allowed Imran to clear to get the score back to 2-4.

The Filipino though won the next rack to move into a 5-2 lead and he made two balls off the next break to put himself in a good position. He missed a tough pot on the 1 ball though, and Majid ran the table to grab a rack back.

Yet another dry break resulted in Bustamante looking good for a run out but he inexplicably scratched into the side pocket with just three balls left on the table. The Englishman returned to the table and finished it off to reduce his deficit to a single rack.

Majid looked to have made a golden break but the cue ball scratched to deny him. With ball in hand, Bustamante ran out to go to 6-4.

He broke and ran the next to reach the hill at 7-4 and there was more of the same in what was the final rack of the game to seal an 8-4 win for Bustamante. 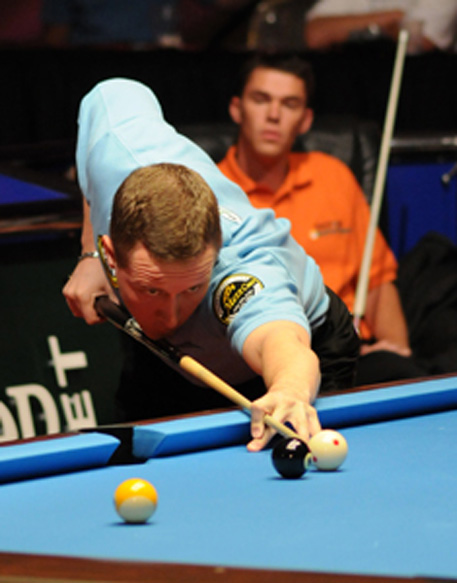 KO PIN-YI, the 18 year-old wonderkid from Taiwan, beat Tony Drago ( Malta ) 8-4 to win through to the semi-finals of the PartyPoker.net World Pool Masters.

The reigning WPA World Junior Champion looks the complete package and he fought back from 3-0 down to win eight out of nine racks to secure an excellent victory.

Drago played very well but I really wanted to win and concentrated very hard, said Ko after the game.

All the players in this tournament are of the highest standard so you must play to your best to stay in the event. Hopefully I can play well tonight, but we will see what happens,  he added.

Drago, who was a winner of this event in 2003, flew into an early 3-0 lead as he raced around the table in his usual bustling style.

A 2/9 combo from Ko in the fourth game gave Ko his first rack and a miss by Drago in the next gave the Taiwanese player the opportunity to run out and reduce the deficit to 3-2.

They shared the next two racks but Ko broke and ran the following two to go into the lead for the first time at 5-4.

Following a push out by Ko, Drago missed a bank on the 1 ball and Ko ran out to increase his lead to 6-4.

In the 11th game, a two rail escape from Drago was far too slow and the cue ball nudged the 2 ball first to give Ko ball in hand. He completed a tricky run out to go to the hill at 7-4.

Ko made the 2 ball off the break and with a semi-final berth in his sights, he looked to be completing a difficult run out but he overshot the cue ball traveling from the 7 to 8 and was forced to play safe.

Drago looked to have the rack in the bag but he flashed at the 9 ball and it missed and fell perfectly for Ko, who rolled it home to take an 8-4 victory. 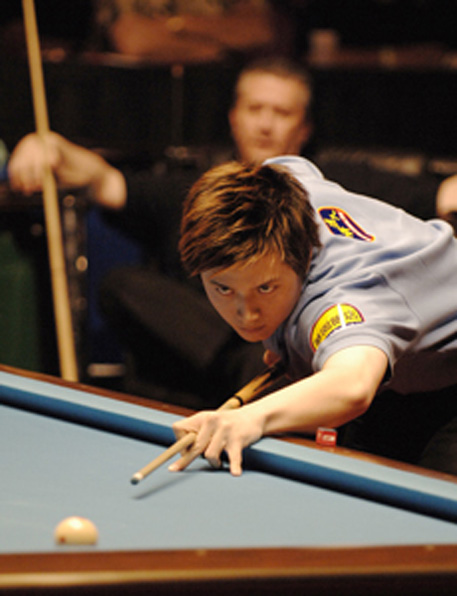 MIKA IMMONEN overcame a shaky start to take down Corey Deuel 8  5 and book a spot in the semi-finals of the PartyPoker.net World Pool Masters, where he plays Ko Pin-yi.

The US-based Finn made a couple of shocking misses in the early stages to gift Deuel racks, but recovered well in the second half as he finally got the hang of the break.

There were definitely some breathtaking situations in that match! said Immonen.

I missed the 8 and 9 early on and Corey was coming with some nice shots and I felt it was slipping away from me.

But he missed that 7 ball and left me an easy out. I played some great shots including that jump on the 3 ball.

I was reading the rack poorly so I decided to go all out and make some hard contact and not risk an illegal break.

Ive never played Ko but seen him play and he seems like a stereotypical Taiwanese player  a stone cold killer  and Ive got to play good to beat him.

It was Immonen who won the lag and ran out the first rack but he suffered a nightmare in the second as he missed a fairly straightforward 9 ball to gift the rack to Deuel.

Aided by some good fortune that saw the 6 and 7 pocketed off the same shot, Deuel took the third rack to take the lead but a dry break saw Immonen back to the table. Immonen played a good safety but Deuel left the 1 ball on.

They traded safeties on the 1 ball before Deuel scratched after banking the blue 2. With ball in hand, Immonen ran out to level the score at 2-2.

Deuel took the next and further increased his lead in the sixth game when Immonen made another horror miss, this time on the 8 ball.

Deuel though, missed an easy 7 ball cueing off the rail, and it fell perfectly for Immonen who pocketed the remaining three balls to take the score 4-3 in Deuels favour.

Immonen pulled out all the stops in the next with a superb table length jump shot to pot the 3 ball and set up a difficult run out to level the score at 4-4.

There was no ball down off the break in the ninth game for the Finn, but Deuel scratched and with ball in hand Immonen played a 1/9 combination to take the lead at 5-4.

Deuel won the next but Immonen increased his lead to 6-5 as he played a wonderful cannon off the three ball into the 9 ball which was hanging by the corner pocket. The cue ball looked like it would drop too but miraculously stayed out as it teetered on the brink.

There was more good news for the 2001 World Champion as he ran out from the break to reach the hill at 7-5. Immonen sealed an excellent performance in the next as he ran the table down to the 9 ball before Deuel stood up to shake his hand in victory. 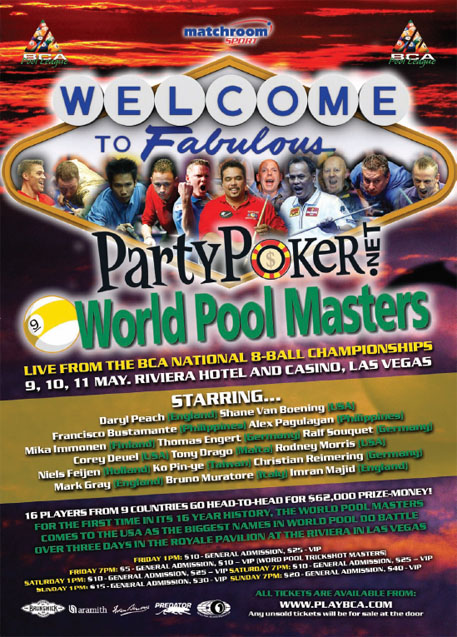 This is the first time in the competition's 16-year history that it will be staged in the USA and the players will be competing for a $62,000 prize fund, with the winner receiving $20,000.

Mosconi Cup team-mates Tony Drago (Malta) and Niels Feijen (Holland) will play each other in Round One, while there will be an intriguing encounter as five-times Masters champion Ralf Souquet (Germany), meets 18-year-old World Junior Champion Ko Pin-yi of Taiwan.

"I believe this is the highest quality field that we have had in the Masters and looking at the first round matches, it is impossible to pick eight winners. said a spokesman for event promoters Matchroom Sport.

"All the players will have to be at the very top of their games to progress and we are all looking forward to some exciting matches over three days of intense competition."

On the Friday evening the World Pool Trickshot Masters will be taking place at the same venue with six leading players entertaining the crowd with a variety of tricks and stunts.