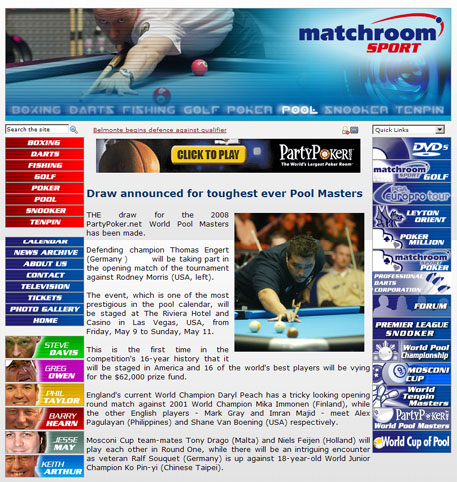 MATCHROOM SPORT can announce the draw for the 2008 PartyPoker.net World Pool Masters which will be staged at The Riviera Hotel and Casino in Las Vegas, USA, from Friday, 9 to Sunday, May 11.

With 16 of the finest players in the world competing, there are no easy rides with eight race-to-eight, winner-breaks first round matches.

Defending champion Thomas Engert (Germany) will open proceedings as he squares up against Rodney Morris (USA) one of the three Americans in the field.

"Read more" for the details.

This is the first time in the competition's 16-year history that it will be staged in the USA and the players will be competing for a $62,000 prize fund, with the winner receiving $20,000.

Mosconi Cup team-mates Tony Drago (Malta) and Niels Feijen (Holland) will play each other in Round One, while there will be an intriguing encounter as five-times Masters champion Ralf Souquet (Germany), meets 18-year-old World Junior Champion Ko Pin-yi of Taiwan.

"I believe this is the highest quality field that we have had in the Masters and looking at the first round matches, it is impossible to pick eight winners. said a spokesman for event promoters Matchroom Sport.

"All the players will have to be at the very top of their games to progress and we are all looking forward to some exciting matches over three days of intense competition."

On the Friday evening the World Pool Trickshot Masters will be taking place at the same venue with six leading players entertaining the crowd with a variety of tricks and stunts.

All tickets are available from: www.playbca.com